In this post I would like to try and show you the direction that Arcanima is driving towards, i'll briefly talk about a few of the current concepts we are working on to give you a flavour of what's going on. We hope this will show you that Arcanima isn't just making different systems and content simply because you can. Instead we are a design driven team that has a long term vision on how it will all fit together on the long run.

To start with I’d like to give a brief overview of the systems we are currently working on. Follow-on articles with detailed descriptions will follow after putting these systems live. It is important to state that our new systems are created to add flavour to the game and not to be a hindrance except in extreme situations.

We would like make this very clear that we do not want a player to be constantly micromanaging their characters and the balancing thoughts and discussions within the team keep this at the top of our priorities. We do not know if the players will take to a new system, but we need to ensure that these systems at least are not a nuisance. This expresses our overall design paradigm to create a roleplayed, diversified gaming world with many different fun things to do, not just faction wars or hack-n-slash dungeoning. 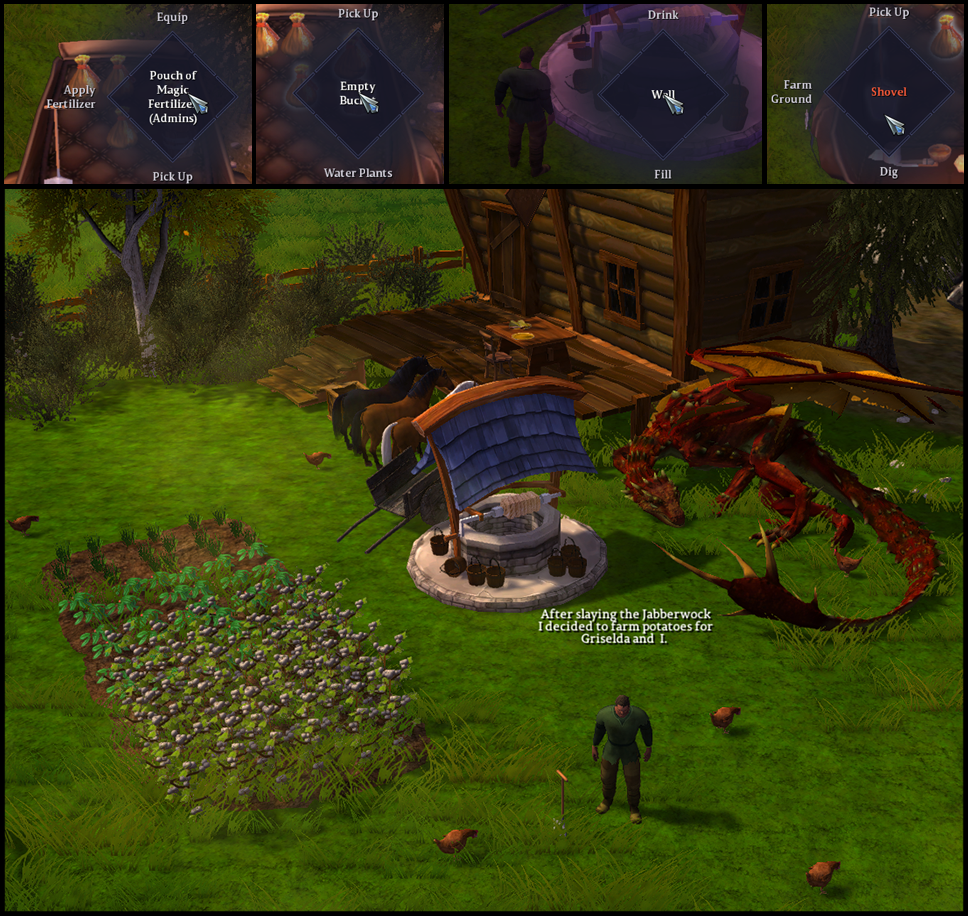 The initial goal for farming is to enable the players to plant crops by digging into a patch of dirt and planting seeds. Plants will grow over time, sped up by fertilizer, correct watering and even aided by magic potions, but if you neglect your farm, your plants will wither and die. Withered plants have a chance to drop seeds. Perfect for crafters and cooks alike, farming much needed ingredients and resources.

One idea for the future will be to add farms into a broader concept of player owned structures like defensive structures (such as guard towers), mining offices and others. These structures will be attackable and can be conquered, but it will be hard for an attacker to do so. Vulnerability windows in time will be determined by the defending player or group. Once this is implemented players will be able to build farm houses, barns and the like and employ workers to take care of the crops and animals.

It won't be a fully fledged farm simulator, just something to add diversity to the gameplay. There isn't much left to do on the farming system in its basic form and it has come so far that we hope to be able to put it live soonish.

Agriculture is the primary sector of economy and as such very important and we felt it was key to have in the game, despite the fact that it will be also be fun. 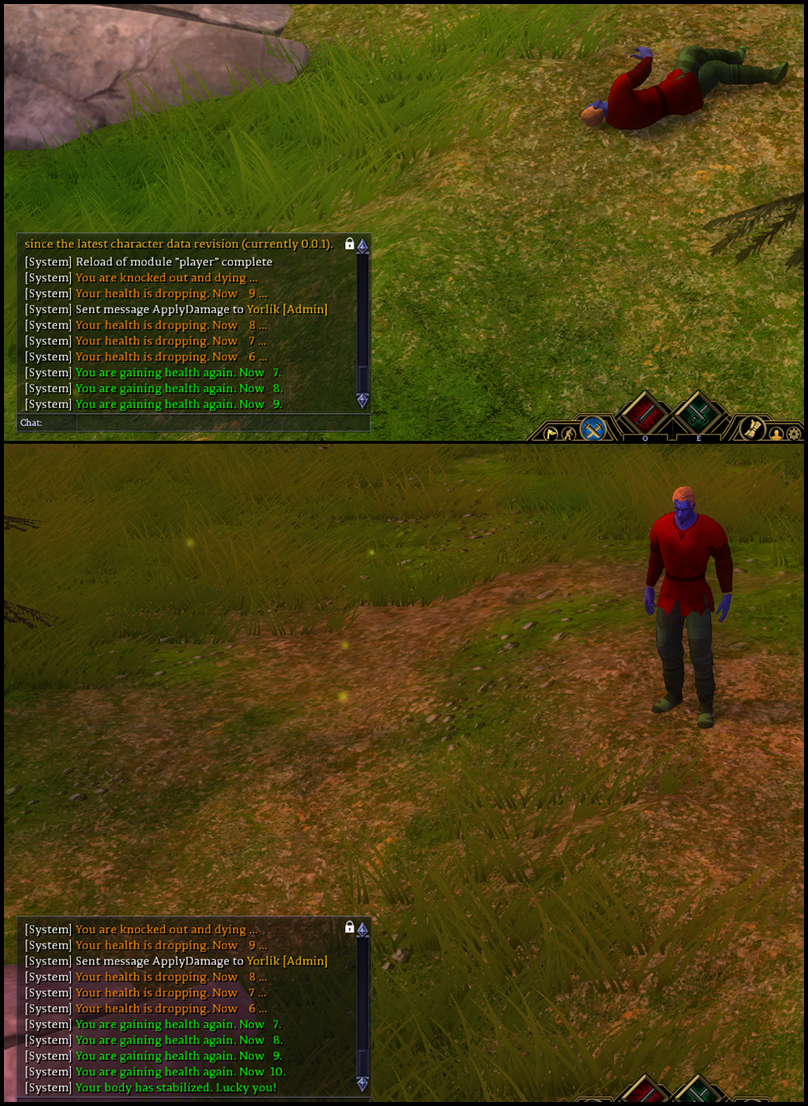 So the reason this system came about was because the latest changes to the game had severely broken the werewolf system and we had to fix it. While doing that we decided to rewrite it as a statemachine design pattern. Life and death are states of a hierarchical state machine. They have substates like bleeding, recovering, being a ghost or corpse.

It will work in a way that players who have taken too much damage will fall into an incapacitated state where they can be looted and are helpless but not yet quite dead. In this state players are constantly losing health. Below a certain threshold they will die. Other players can decide to heal and help them up or decide to finish them off. On each step towards death there is a slight chance to enter a recovery state where the players start gaining health again.

Hostile mobs generally lose interest and stop fighting once a player is incapacitated, with few exceptions, like certain bosses or high level mobs. Players are still helpless and lootable when recovering, but will recover if undisturbed. Above a certain health threshold the players can stand up and move again. The chance for recovery will depend on the overall physical fitness of the players. Certain critical hits or death magic might bypass this state and lead to instant death.

After dying, the system is very similar to the current game. You will have to make your way to a resurrection stone and hopefully get back to your loot and not turned into an undead minion of a powerful necromancer. Offering players things like lichdom for themselves and other options can easily be developed later with this system.

This system will be a core concept that all players must get to grips with. The idea for this system originated from DayZ and I think it is fantastic. It will bring a body representation system to your characters and make you think about your ability to stay alive. This system is based around the character's body and how to keep it ticking over; eating, drinking, fitness level, body temperature, blood loss, vitamin status, clothing moisture, toxicity level, disease status, injuries and even fat reserves and maybe even blood thickness and pressure. Addictions will also be added. These and possibly even more will be used to create a fantastically realistic survival system that can be impacted by the player, clothing and items, and even the surrounding landscape or climate.

Imagine, if you eat too much unhealthy food over a long period of time, you will gain weight which in turn affects your fitness level, which in turn affects your blood pressure. All these can have an impact on your ability to concentrate, reduce your agility or even your character's stamina. You cannot expect to be the shard’s best dual handed warrior with high blood pressure and an addiction to chicken pies? But on the flip side, if you want to role play a roly poly, rosy cheeked, ten pint a day local pub landlord with a lovable chuckle and high blood pressure, then you can. Its up to you.

Another scenario could be a trip into the wilderness with a local hunting party, the weather was fine when you set off. Half way up the mountain a snow storm hits catching most of you out, ill prepared and lacking warm clothing. This will decrease your body temperature without shelter and a fire, potentially causing hyperthermia, frostbite and even death. On the other side you may be in a desert and overheating, equally as dangerous without shelter from the sun and enough drinking water … You get the idea.

To supplement this we will add a survival crafting system which is not skill based to allow you to survive by finding resources if you are stranded. These are just a few examples of how the system will work and the potential for making each character, experience and journey unique and unlimited.

If you want to register for an account on Arcanima  you need to follow a two-step process:

Second: Fill out the Google form to verify you are not a bot:  Registration Form on Google

All registrations are moderated and will only be approved after filling out the form.

This helps us to avoid spambot registrations.